June 3rd 2011. A silly idea popped into my head: “Why not make a lorem ipsum generator using all words of meat?” After some array randomizing and string concatenation, the initial functioning code was done.

A short time later, after purchasing the domain name and launching the site, I passed it along to my co-worker Sarah, who later designed our iconic pig logo.

After a few tweets, it started going viral a few days later, and the rest is history!

To celebrate the 10 year anniversary, we’re doing a $100 giveaway! Throughout the month of June 2021, post your favorite picture of you using Bacon Ipsum however you see fit and tag it with #baconipsum. Twitter, Instagram, Facebook, etc, doesn’t matter which social media platform, we’ll find it.

We’ll announce a winner in early July. That person will receive a $50 gift certificate to their company of choice, and we’ll also donate $50 to a charity of their choice. And we’ll send you some Bacon Ipsum stickers if you’d like!

Start at 21:30… they picked an excellent name for their group! #BaconIpsum 🥓😁 https://t.co/9PFxxwzAa0

Later this year, we’ll be switching the site over to HTTPS only, instead of both HTTP and HTTPS as it is now.  If you use the site in a browser, this should not have any impact on you, but if you have an API that is using HTTP, you’ll want to get that updated to use HTTPS.

I’m currently attending php[world] 2016 and went to a great talk by David Stockton on integrating SMS and voice calls with PHP.  After discovering how easy it is to set up, I added text message support to Bacon Ipsum. 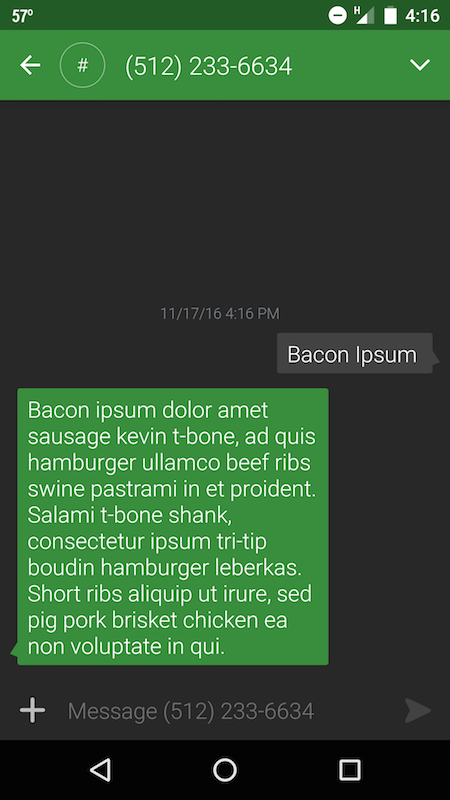 What does the cow say?

Props to @JBasoo for this little tidbit.

Christmas is right around the corner, so we added some snow to the site and our pig is keeping warm thanks to an ugly sweater by Kenzie Moss (psst… she’s a great designer, hire her!)

Here’s a screenshot in case you missed it… 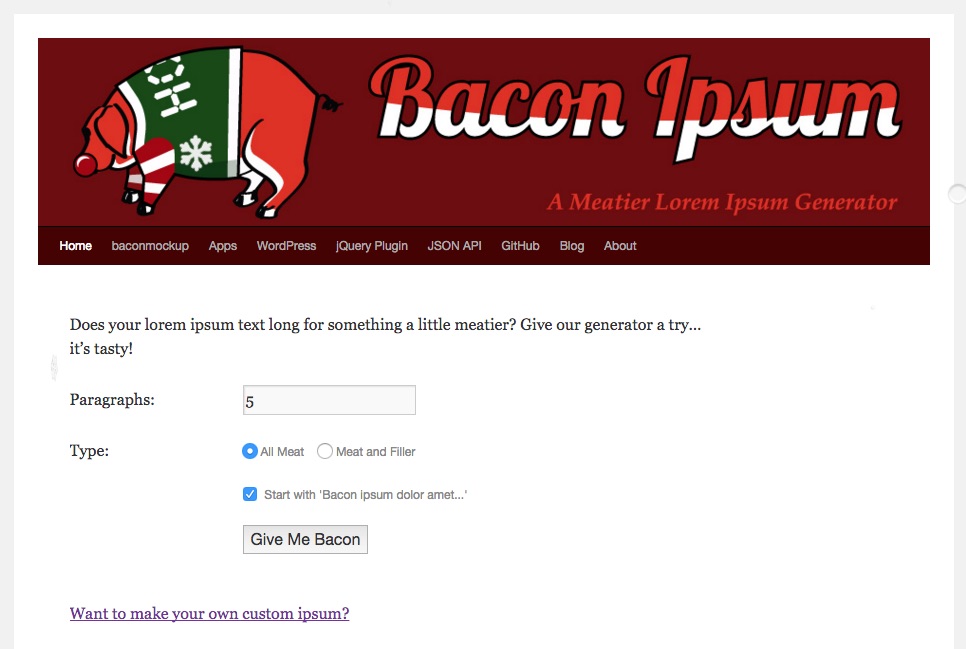 A few months ago, we published a blog posts on how to bulk generate posts using the WP-CLI and the Bacon Ipsum API.  Well, now it’s even faster and easier.

The latest release of the Any Ipsum plugin has WP-CLI support built-in to generate posts with filler content.  First, install and activate the plugin from the command-line.  By default, the plugin comes with Bacon Ipsum filler content.

Then, use the new any-ipsum generate-posts command to generate posts.  It defaults to ten posts, but you can pass in the number of posts to generate if you want more or fewer.

There are several options, so check out wp help any-ipsum generate-posts for a full list of what you can do with it.  Enjoy!

As seen on a postcard

I’m not sure how they got the site to generate filler in pen, but it’s a cool trick.  😉

Updates to the API

We have some new updates to the Bacon Ipsum API:

New formats: ‘text’ and ‘html’ if you need responses in something other than the default JSON format.  Ex: https://baconipsum.com/api/?type=all-meat&start-with-lorem=1&format=html (Thanks to Shawn Hooper for new formats).

Ranges for paragraphs: Need to generate a random number of paragraphs?  We support that now, just put the range in the paras parameter, ex: paras=3-7  https://baconipsum.com/api/?type=all-meat&start-with-lorem=1&paras=3-7

These same updates have been made to the Any Ipsum WordPress plugin.